Gotokoi refers to any illegal actions by players to use cheating devices and other scams to obtain more pachinko balls.

In Japan, there has been a long history of gotoshi, which is comparable to the history of pachinko. From 1945 to 1954 there was the so-called “yamidama” (fake ball) problem resulting from the use of commercially-available cheap bearing balls, instead of “official” balls, to play in pachinko parlors. At that time, the pachinko parlors introduced a system for sorting balls by size or had identification marks engraved on their balls. They had long been concerned about this problem. Nowadays, cheap bearing balls are not used any more. However, even now, some players get balls or tokens at a lower price in a pachinko parlor and use them in another pachinko parlor; or they try to use lots of balls obtained from abandoned pachinko parlors at current establishments. The “jishaku-tsukai“(use of magnets to move balls to the winning hole) trick, which appeared between 1945 and 1954, is still used; some pachinko parlors have suffered financial damages due to such tricks.

Such gotoshi scams/cheats continue to change shape as game machines become more sophisticated and computerized. Initially computerized game machines experienced denshi-goto (electronic trick), which was based on the response of the Start Chucker (start gate: rotation for main digital is started) to the operation of an electronic lighter or transceiver. Thereafter, gotoshi tricks became even more aggressive and sophisticated with the advancement of technology. Over the last 20 years, many scams/cheats on game machines, such as replacing game machine chips with unauthorized ones after business hours or forcing (or enticing) pachinko parlor staff to help install unauthorized chips, have been reported. There are other tricks: causing false operation of the discharge port of the game machine using electronic tricks or wiring, hitting an oatari (jackpot) fraudulently by using imperfections in the structure of the enclosure or in the program. Almost all parts of the pachinko parlor are subjected to scams/cheats such as those on ball counters/receipts and removal of cash from Ball Lending Machines between game machines.

Measures Taken by the Pachinko Industry to Eliminate Gotokoi

In the pachinko industry, pachinko parlors, pachinko manufacturers, dealers, ancillary device manufacturers, and their industry bodies are exchanging information and taking specific measures against gotokoi. For example, the Pachinko Pachislot Security Information Organization (PSIO) collects information on scams/cheats, such as the “alleged manipulation of ball/token count” and “exaggerated advertising of more balls from a specific game machine,” from both inside and outside the industry. The PSIO consists of two communication networks: one is for receiving scam/cheat information both from the public and industry participants and the other is for exchanging information among related bodies. Information on scams/cheats received by the PSIO is summarized on a monthly basis and is then reported to each prefectural police department. Such information is processed in the form of a database and is collected in such a manner that it can be analyzed and examined at any time. 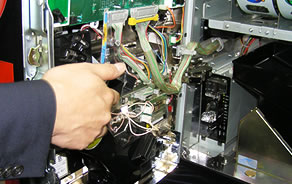 Outside organizations also keep an eye out for scams/cheating in the pachinko industry. The third-party Organization for the Sound Development of the Pachinko & Pachislot Industry (OSDPPI) has organized a routine inspection system to get rid of tampered gaming machines and peripherals such as calculators, etc. and conducts unannounced on-site inspections of pachinko parlors throughout Japan during or after business hours. In 2015, it started a “gaming machine performance survey” by checking for tampered game nails by planting investigators amongst ordinary players at pachinko parlors. An organization established in 2007 has inspected more than 20,000 pachinko parlors total over the last 10 years. In addition, on-site inspections are also conducted mostly by each prefectural association of pachinko parlors. Furthermore, some pachinko parlors have independent security companies take measures or have a specialized unit. Thus, the pachinko industry is taking measures to eradicate scams/cheating on multi-layers and from different perspectives.