How much are the annual sales of pachinko and pachislo combined? The market size described in the Japan Productivity Center’s “White Paper” on Leisure is a typical market size indicator, which is used inside and outside the pachinko industry. The pachinko market size in 2020 was calculated to be 15 trillion yen. The white paper says that the market size is based on Ball/Token Lending Fees; therefore, it corresponds to the annual total of money paid by pachinko players to use balls/tokens in pachinko parlors in Japan. In bookkeeping, revenues from ball/token lending fees should be recorded as sales. Companies that run pachinko parlors are supposed to do bookkeeping in accordance with such accounting principles. Therefore, the sales recorded in the settlement report of a company that runs a pachinko parlor(s) almost always corresponds to the revenue from lending balls (tokens). 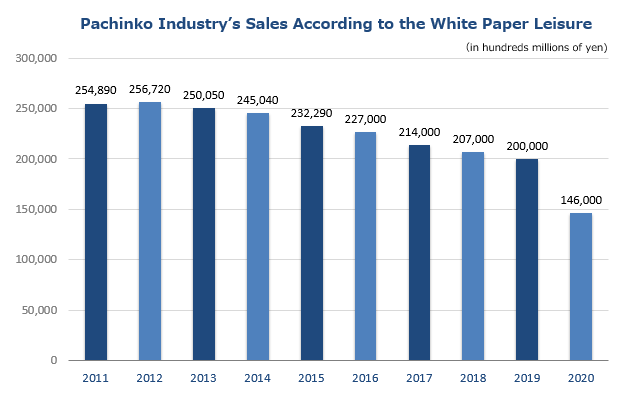 The pachinko industry is frequently called a 30 trillion yen industry. This is based on its revenues that were announced by the Management and Coordination Agency, which was later incorporated into the Ministry of Internal Affairs and Communications, in January 1996. In response to this announcement, the related figures in the “White Paper on Leisure” were corrected. Subsequently, the figure was corrected by going back to 2016 in the recent “White Paper on Leisure for 2019.” The correction was made to align with the market size that was estimated from the aggregate data based on the information disclosure system [DK-SIS] using data collected from the pachinko parlors that were connected with the computer system of Daikoku Denki, Co., Ltd., which is engaged in the development, production and sale of computer devices in the pachinko industry.

Another Approach toward Increasing Sales Volume 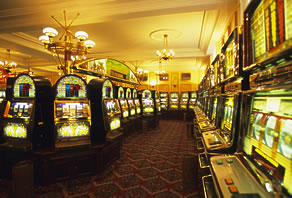 Did you know that there is a controversy as to whether the ball (token) lending system is appropriate for the size of the pachinko market? Some people think that pachinko parlor sales should be calculated by subtracting the costs of offering prizes to players from the revenues from the ball/token lending fees paid in the pachinko parlor. In their opinion, gross profits should be reported as sales. In fact, in the gaming industry, which is often associated with casinos, they normally report their sales by subtracting the amount of money paid to players from the amount of money received. The casino markets in Las Vegas, Macau, and Singapore are said to be about 10.2 billion USD (about 1.0399 trillion JPY, 2013), about 360.7 billion MOP (about 4.6897 trillion JPY, 2013), and about 5.2 billion SGD (about 419.3 billion JPY, 2013), respectively. However, it should be noted that these figures are dwarfed due to differences in accounting systems. Critics often label Japan as the Paradise of Gambling based on simple comparisons between the world’s major casino markets and the Japanese pachinko industry. We would say that it is unfair to make comparisons based on the figures from the different accounting systems.

To present a better picture, Daikoku Denki publicized both the market size and gross profit estimated from aggregate data collected by “DK-SIS.” 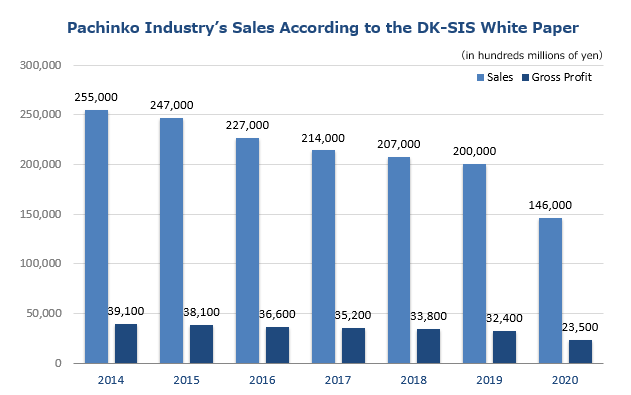 According to the “DK-SIS White Paper for 2020” from the company, the market size and gross profit of the pachinko industry were estimated at about 14.6 trillion yen and 2.35 trillion yen, respectively, in 2020.

In the DK-SIS White Paper, the gross profit is regarded as the most important indicator of the pachinko industry’s market size. The gross profit has been declining year by year. This means that the pachinko industry must survive in environments that get harsher and harsher every year. It is also possible to calculate the pachinko market size based on pachinko parlors in Japan using the estimates in the “Current Survey of Selected Service Industries” conducted by the Ministry of Economy, Trade and Industry or the Economic Census figures, the figures from the prepaid card system suppliers, or the total sales reported by the companies that run pachinko parlors.