The results of questionnaires of players, as well as other people, about pachinko parlors, indicate that the majority of them are always dissatisfied with cigarette smoke and noise. These two problems have long been a big challenge for the pachinko industry. 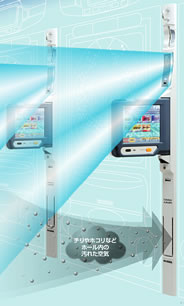 Regarding cigarette smoke, recently-opened pachinko parlors are designed to remove smoke in an efficient manner. In addition, they are equipped with various measures including air purifiers, negative ion generating apparatuses, fragrance diffusers, and transparent acrylic boards for separating smoking areas. However, we must admit that people that hate the smell of cigarettes are still far from satisfied. Pachinko parlors have a high percentage of patrons who smoke compared to other commercial facilities. It is difficult for pachinko parlors to separate adjoining pachinko machines or ask players not to smoke. In spite of such conditions, we must continue making every effort to solve the problem of smoking in accordance with the technological advances in equipment. Recently, there has been an increase in pachinko parlors that prohibit smoking except in smoking rooms. Nowadays, smoking is completely prohibited in some large-scale pachinko parlors. On the other hand, the whole pachinko industry is also expected to provide facilities in which players “can smoke without harming others.”

Regarding noise, as you know, a lot of different sounds are produced at pachinko parlors. The industry body of play machine manufacturers has set upper limits on the volume of electronic sounds/sound effects from game machines. In addition, some of the recently-developed game machines are designed to allow the player to adjust the volume as required. As for other noises, the internal structure of the shima (“island”, where pachinko machines are installed) equipment and ball replenishing device have been modified to reduce noise. In addition, these equipment and devices are equipped with measures including damping and sound absorbing materials. Similar to the problem of smoking, it is necessary to strike a good balance between entertainment and annoyance because some players like such sound effects.

Apart from the noise, cigarette smoke and the smell of cigarettes, the pachinko industry has made considerable progress in the improvement of convenience and comfort. This includes chairs which are more comfortable and reduce fatigue, even after long hours of play, cozy lounges, free areas to read manga, mobile phone battery charging stations, WI-FI connectivity services, powder rooms in women’s restrooms, and other equipment and services are provided.