About 230,000 People Employed in Pachinko Parlors

According to the Economic Census for Business Frame conducted by the Ministry of Internal Affairs and Communications (MIC), about 229,000 people were employed in the pachinko industry in 2016. On the other hand, the pachinko industry body announced an estimate that 224,000 people were employed as of March 2019. A third-party pachinko parlor management monitoring organization summarized trends of employment in pachinko parlors, based on these figures.

Numbers of People Employed in Other Industries

So, it is clear that pachinko parlors have not only significant sales, but also contribute greatly to the country’s employment.

Based on the Current Survey of Selected Service Industries conducted by the Ministry of Economy, Trade and Industry, the average number of employees per business establishment (pachinko parlor) in 2018 was calculated to be about 27.1. Of these employees, 12.1 people were employed full-time and 15.0 people were employed part-time. This clearly shows that a pachinko parlor operates as a human-resource-based services business while it is closely connected with the process industry. 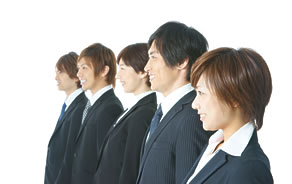 An increasing number of such companies are beginning to improve their work environments and training programs. The pachinko industry was said to have a high employee turnover rate due to long hours of hard work. However, many of the companies are making efforts to improve their employment conditions by offering better benefits and training programs, developing executive candidates, enhancing self-development programs, etc.

According to research conducted by a pachinko industry body in 2019, an annual total of 90.4 billion yen of corporate tax was estimated to have been paid by pachinko parlors. This figure was calculated by multiplying the number of gaming machines installed across the country (as calculated by the National Police Agency) by the result (tax per unit) obtained from the questionnaires completed by companies running pachinko parlors.

Every year, the pachinko industry is ranked high in income tax false declaration accusation rate and tax evasion amount according to data collected by the National Tax Agency. However, the pachinko industry’s ranking in the chart of the worst tax payers was down, showing signs of improvement in recent years. There are many areas under the regional taxation bureaus in which the pachinko parlor business is not ranked high in either income tax false declaration accusation rate or tax evasion amount. It is not clear why there are such differences amongst areas. Each local pachinko industry body holds tax payment related training sessions/seminars at regular intervals to encourage correct tax payments.