The pachinko industry is connected with many ancillary device manufacturers and other related businesses, as well as with pachinko parlors and pachinko/pachislo machine manufacturers.

A think-tank estimated the market size including gaming machines and ancillary equipment at 857.4 billion yen in FY2017. Although the size contracted considerably from the previous fiscal year, the number shows that the pachinko industry still has an extremely large market.

Many ancillary devices are used for the operation of a pachinko parlor. Some typical ancillary devices include Ball/Token Lending Units, calling lamps, and money changers. In particular, money changers have become increasingly sophisticated these days. Some of them display oatari (jackpot) information and game features of each gaming machine on a large LCD screen; they also serve as terminals for the provision of information on pachinko parlors and gaming machines. 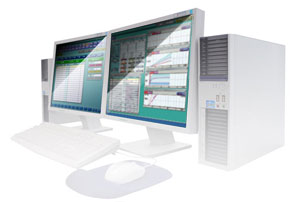 As backbone equipment, pachinko parlors use systems for feeding balls into pachinko machines, and also, desktop computers that collect and analyze operational data, etc. of gaming machines, although such systems are invisible to visitors. Although balls used to be fed manually by female employees and others behind the gaming machines, from 1955 to 1964, an automatic ball feeding system was developed to achieve substantial labor savings, which contributed to the modernization of operations at pachinko parlors. Modern ball feeding systems are equipped with an automatic ball cleaning function. The operating status of each pachinko machine can be monitored in real-time using desktop computers installed in the pachinko parlor. The analysis, etc., of customer data linked to the member management system is used to develop pachinko parlor operation strategies.

In pachinko parlors, there are many ancillary devices: POS systems handling prize exchange data, CCTV cameras used for security purposes, game information disclosure devices and air-conditioning systems to ensure comfortable playing conditions. In addition, there are many other items such as automatic cigarette butt recovery devices, coin/bill transfer devices, furniture/fixtures including chairs, not to mention balls/tokens.

Regarding related industries, companies that supply various electronic parts to be incorporated in gaming machines are affected considerably and see their performance deteriorate remarkably when the gaming machine market stagnates. Furthermore, in respect of gaming machines, the copy rights market concerning “content-based” gaming machines that use motifs from cartoons, movies, dramas, comics, etc., has also become big business. In some cases, gaming machine manufacturers are involved in the production stage of cartoons, and in other cases, because a gaming machine that tied up with a cartoon became popular in the market, the cartoon was able to attract attention anew.
The boom and slump of pachinko parlors affect some other industries considerably. There are many industries that are closely connected with the pachinko industry, such as advertising agencies that prepare flyers inserted in newspapers and POP inside and outside parlors, staffing agencies that dispatch staff to pachinko parlors, companies that design and construct pachinko parlors, and suppliers of prizes, such as food and commodities. Thus, the pachinko industry has a huge array of supporting industries.