From First Appearance to Prewar Period

There are different stories about the origin of the “modern type” of pachinko.
It was believed to have originated in the game machines imported from Europe and the United States, such as the “Corinth Game” and “Bagatelle,” between 1912 and 1926. However, recently it was found that there had been vertically-placed game machines, just like pachinko machines, across Europe, which were not “table-based” game machines. Currently, it is commonly believed that pachinko originated from such game machines. 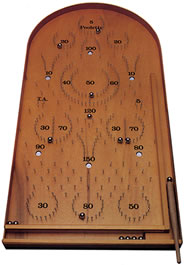 Originally, such game machines were traded by stall keepers. Stall keepers started business using them at “ennichi” (a special day related to Shinto and Buddhism) festivals. The pachinko industry started out in this way. Beginning in the mid 1920’s, game machines on which the player flipped 1-sen copper coins became popular. The Japanese government imposed a ban on playing such games because flipping the coins with the Chrysanthemum Throne engraved on them would insult the Imperial Family. Thereafter, it became common practice to use tokens or balls. Game machines for playing games by inserting balls directly into them were developed. As prizes, candies and cheap sweets were replaced by cigarettes; pachinko became popular among adults. However, after the Pacific War started, the pachinko industry was regarded as a “useless” industry. During that period, even temple bells and household pots and pans had to be offered to compensate for the lack of metal resources. Pachinko balls were also expected to be offered, forcing pachinko parlors out of service.

Pachinko Boom Thanks to the Masamura Gauge and Tulips 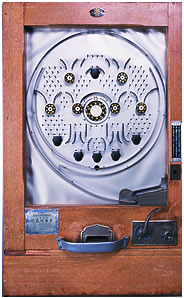 The recovery of the pachinko industry began by modifying prewar game machines remaining in rural areas and then putting them into service. Between 1945 and 1954, Takeichi Masamura, who is even now revered as the “god of pachinko” in the industry, developed an epoch-making pin arrangement called the “Masamura Gauge”, which is the basis of the modern pachinko board. The Masamura Gauge transforms the old-fashioned monotonous pachinko machine, which was designed to make balls simply cascade between pins, into a thrilling and surprising game machine, contributing to the first Pachinko Boom. During the early 1950’s, the “renpatsu-shiki” (successive shot) pachinko machine which sent balls automatically from the ball tray in roughly the same manner as nowadays, was developed; it succeeded the “tanpatsu-shiki” (single shot) pachinko machine. At that time, it was possible to shoot 140 to 160 balls per minute, making pachinko even more popular. At the peak, more than 45,000 pachinko parlors were in operation in Japan.

To overcome this severe hardship, the pachinko manufacturers started developing pachinko game machines free of the spirit of gambling. Between 1955 and 1964, “yakumono” (accessories) such as jinmitto (one type of accessories) and tulips (one type of accessories) appeared. During the same decade, Jankyu (game combining mahjong and pachinko) machines were also developed. New types of game machines such as “Olympia Machines” (Japanese-style slot machines), on which pachislo machines were based on, came into existence around 1965. At that time, there were technological advances in labor-saving machines, such as Ball Lending Machines and Ball Feeding Machines as pachinko parlors grew in size. In addition, idle suburban bowling centers were transformed into pachinko parlors one after another. An increasing number of suburban pachinko parlors were opened in response to wider use of automobiles in Japan. In addition, as electronic devices became more common throughout the country, electronic components such as motor-operated Handles (knobs designed to shoot balls) and electronic circuit boards were also introduced. In spite of such efforts, for more than 20 years, the number of pachinko parlors had remained almost at the same level as the period shortly after the imposition of the ban on renpatsu-shiki pachinko machines.

In 1980, the Fever pachinko machine was launched, achieving blockbuster success. It triggered an increased gambling spirit among players as the Japanese economy grew, and pachinko parlors increased by hundreds a year, creating an unprecedented pachinko boom. The “Hanemono” (simple-type) pachinko machine launched in 1981 became popular. In addition, a wider variety of gaming machines including Jankyu, Arrange Ball, and pachislo machines were made available. Pachinko was in the process of establishing a firm position in popular entertainment.

Pachinko continued to be in a favorable position into the Heisei period (1989-present). Technological innovations including prepaid card systems and color monitors were introduced. As a result, the market of pachinko parlors has grown to become a giant industry totaling as much as 30 trillion yen. The pachinko industry seems to be in a favorable position. However, it is facing a series of problems, which is comparable to the effects of the ban on renpatsu-shiki pachinko machines. The pachinko industry has been forced to downsize its operations in accordance with the regulations imposed by the administrative authorities and the industry’s voluntary regulations, all of which resulted from the social problems related to pachinko, i.e., accidents involving infants in pachinko parking lots due to pachinko addiction, multiple consumer loans, rampant use of altered prepaid cards, etc. Thus, the number of pachinko parlors has been declining for 25 consecutive years (since the peak [18,000] was reached in 1995). Currently, it is approximately 9,000.

The market itself is shrinking.

Recently, the pachinko industry has been actively tackling such problems. It is taking measures to enhance customer-friendliness, such as Lending Balls at a Low Price (1-yen pachinko), and developing entertainment-oriented gaming machines to attract a wide range of people. The industry’s recovery is still far from over in terms of figures.